The area around the Lake Wilderness Arboretum has changed a lot over the years. Let us introduce you to our neighborhood and history.

In the 1890’s, one of the largest logging mills in King County was located at Lake Wilderness. In the early 1900s, a homesteader whose property was on the shore of the lake offered a few rental cabins on his farm to fishermen and hunters. The Gaffney brothers, Tom and Kane, bought the land and began developing a resort in 1926. They later bought two adjacent resort properties and combined them all into a complex of about sixty rental cabins that offered indoor and outdoor recreation, including boat rentals, a golf course, a bowling alley, a dance hall, a roller rink, and a restaurant. The resort was a popular destination for locals and visitors during World War II.

The award-winning Lake Wilderness Lodge was constructed in the early 1950’s. At the same time a 2,400-foot airstrip was added to encourage visitors to take air taxis to the resort. Some 8,000 people had attended the lodge’s 1950 opening celebration that included an air show utilizing the new air strip near the building. But over the next decade, the resort’s popularity declined. By the 1960s the crowds would die down and the park was purchased by King County in 1964. 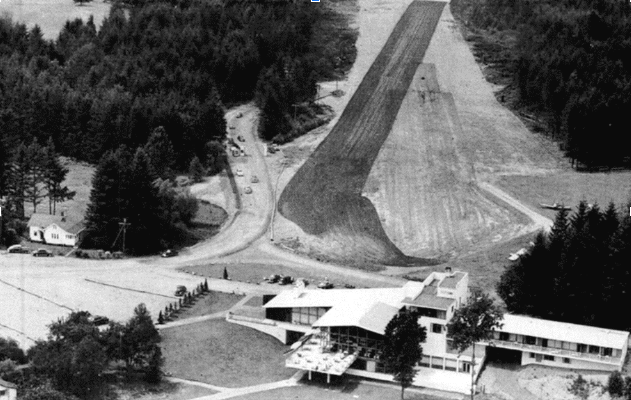 Gaffney’s Lake Wilderness Lodge and 2,400 ft airstrip as it appeared in Flying Magazine in 1952

Unlike most public gardens, the Lake Wilderness Arboretum did not begin with an endowment, an estate, nor a city or state to back it. It didn’t even begin with a location.  In 1965 George Tersiisky, a Bulgarian immigrant, and a small group of supporters, including Kent Mayor Isabel Hogan, Ardis Johnson, and Lillie Wagner, organized and incorporated the South King County Arboretum Foundation as a 501c3 nonprofit. The Foundation’s goal was to establish an arboretum in south King County.

The committed group lacked land and funding but approached King County with their strong desire. In October 1967, King County approved in principle the concept of an arboretum on a portion of the acreage held by King County Parks Department – the former Gaffney Resort on Lake Wilderness in Maple Valley. In 1969, the King County Parks Department gave final approval to a partnership with the Foundation for the development and management of an arboretum on over 40 acres of the Gaffney property- the area surrounding what had been the resort’s airstrip.

In 1970, the County engaged an architect whose overall design for Lake Wilderness Arboretum was approved by the Parks Department and endorsed by the Foundation. A growing membership and devoted volunteers proceeded to enact manageable elements of the design. The resort’s old corral became an active nursery for the propagation of plants, including trees and shrubs.

Development and operation required funding and the concept of a plant sale became reality. In 1971, donations and nursery stock went on sale on the board walk at the Golden Steer Restaurant at 240th and Benson in Kent. Now taking place at the Arboretum, the Spring and Fall Plant Sales have become annual events and a major funding source.

In 1972, augmented by Forward Thrust funds, the County installed a well, electricity, a lath house with overhead irrigation and cyclone fencing at the nursery site. These projects were jointly completed with Arboretum volunteers and students hired by the King County Work Program. Later in the 80′s, the County approved and funded the field irrigation, installed by volunteers and work program youth.

County-wide comprehensive planning in the early 90′s involved community input to establish the use of public property in King County. The resulting plans for the park and Arboretum serve as a guideline as the Foundation continues to develop the Arboretum into a regional resource. The mid-1990’s brought a flurry of activity as new gardens and plant collections were added.

The Turn of the Century

Just as the Arboretum came into existence through the hard work and commitment of volunteers over 50 years ago, we still rely on the efforts of volunteers today.