If you grew up believing that deciduous trees are trees with broad leaves that drop their leaves in the fall and that coniferous trees are evergreen trees with fine needles, you might be surprised to learn that this is only partially correct. This common description, often found in grade-school textbooks, may be accurate, but it doesn’t tell the whole story.

Most trees and shrubs fall into one of two categories: deciduous or coniferous. The deciduous trees have leaves that fall off yearly. Coniferous trees bear cones and have needles or scales that do not fall off. Another common name for these conifers is evergreens, although not all evergreens are actually conifers (i.e. some tropical trees and shrubs).

There are about 20 species, however, that straddle both worlds and are dubbed deciduous conifers. These trees form cones and sprout needles like conifer trees, but they also change colors in the fall and lose their needles every year like deciduous trees.

Of the five genera of deciduous conifers (Larix, Metasequoia, Psuedolarix, Taxodium and Glyptostrobus), three can be found at Lake Wilderness Arboretum.

The larches are probably the best known of the deciduous conifers. They are found growing in the cooler climate of the temperate northern hemisphere and are one of the dominant species in the huge expanse of boreal forest in Canada and Russia. In autumn, they turn a lovely buttery yellow.

Larix laricina, commonly called tamarack, eastern larch, American larch or hackmatack, is a deciduous conifer whose green needles turn a showy yellow in fall before falling to the ground as winter approaches. This is a tree of very cold climates, growing to the tree line across North America. It is native to boggy soils, wet poorly-drained woodlands and some moist upland soils. The cultivar ‘Blue Sparkler’ (Larix laricina ‘Blue Sparkler’, OL10) puts on new blue needles in the spring that hint of sparklers as they burst on the scene. In the fall, the needles change to an excellent, rich yellow. 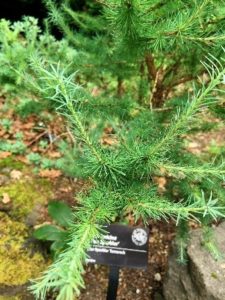 Dawn redwood (Metasequoia glyptostroboides) is a huge, deciduous conifer that can grow to a mature height of up to 150 feet, with a trunk diameter of more than 8 feet. The tree is characterized by a pyramidal habit, peeling, reddish bark, and deciduous needles, about 1/2-inch long. A native of the Sichuan and Hubei provinces in west-central China, dawn redwood grows in sunny sites with well-draining soil or soggy soils. The Arboretum has a cultivar, Metasequoia glyptostroboides ‘Ogon’ (OL12) which features soft, linear, feathery, fern-like foliage that is distinctively golden-yellow throughout summer. Foliage gradually turns orange-brown in fall. 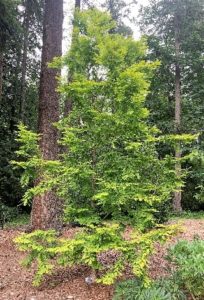 The name for this beautiful tree (Psuedolarix amabilis, OL04) translates into pseudo meaning false, larix meaning larch and amabilis meaning loveable. Although this tree is commonly known as the golden larch, it is more closely related to abies and cedars. It is both rare in cultivation and in its native habitat of eastern China.  The bright green needles turn a beautiful golden yellow in autumn, hence the common name. Look out for the distinctive cones that resemble globe artichokes. 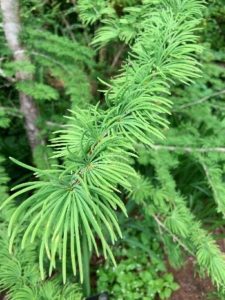