How can you not love a plant that blooms in the late winter and early spring when we are surrounded by a lot of grey skies and cold rain? Commonly known as hellebores, the Eurasian genus Helleborus consists of approximately 20 species of herbaceous or evergreen perennial flowering plants that light up our gardens during the darkness of our winters.

The most popular and, for that matter, easiest to grow are the Oriental hybrid hellebores (Helleborus x hybridus cvs.). Hybrid hellebores get their common name, Lenten rose, from the rose-like flowers that appear in early spring around the Christian observance of Lent. The “blooms” (which are actually sepals that protect the true flowers) last for several months, from February until May, and the foliage is evergreen in all but the coldest regions. 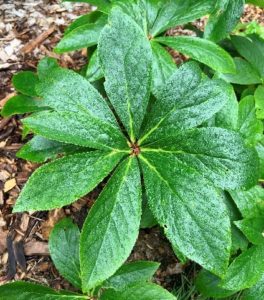 Other species of hellebores to know are the so-called Christmas rose (H. niger), which is a traditional cottage garden favorite that bears pure white flowers (which often age to pink) in the depths of winter; the Corsican hellebore (H. argutifolius), a robust plant with pale green, cup-shaped flowers and attractive leathery foliage and the Stinking Hellebore (H. foetidus) which has drooping clusters of small, pale green, bell-shaped flowers that contrast with its dark evergreen foliage. All of these hellebores can be found in the Legacy Garden at Lake Wilderness Arboretum.

Hellebores are easy plants to grow in the garden and don’t require much maintenance. The plants are usually left alone by animals such as deer and rabbits due to the fact that the leaves produce poisonous alkaloids, making them distasteful to animals.  Hellebores bloom first and then develop their foliage for the year. Cutting back the previous year’s foliage in early winter (December/January) helps to show off the blooms and curb grey mold (Botrytis cinerea), a fungal disease that they are susceptible to. Hybrid hellebores often re-seed themselves, so you may start with one clump and end with a spread throughout the garden.