Most owls are nocturnal predators, with hooked bills and needle-sharp talons (claws). They have wide wings, lightweight bodies, and feathers specially designed to allow them to silently swoop down on prey. Depending on the species, adult owls hoot, screech, or whistle.

More than a dozen species of owls live in Washington. The great horned owl (Bubo virginianus) is the most widely distributed owl in both Washington and North America, occupying dense forests, open woodlands, clear cuts, deserts, and urban environments, including golf courses, cemeteries, and parks with adjacent woodlots. The great horned owl is easily identified by its large ear tufts or “horns.” It’s also called the cat owl because the tufts look like cat ears. The great horned owl stands 20 inches tall and has a 48-inch wingspan. It is dark brown with black spots above; the underparts are pale brown with heavy, dark brown bars. Some subspecies are paler. All have large yellow eyes. Great horned owls can turn their heads 270 degrees either way when facing forward, but they can’t turn their heads 360 degrees.

The barred owl (Strix varia) is primarily a bird of eastern and northern U.S. forests but is becoming more common in Western Washington. This owl is similar in size to the great horned owl, but has dark eyes, a thicker appearing neck, and no ear-tufts. The barring pattern on the neck and breast is crosswise and lengthwise on the belly.

The barred owl is distinguished from the spotted owl (Strix occidentalis) by its streaked belly (spotted owls have a combination of spots and bars). Barred and spotted owls are closely related and occasionally mate where their ranges overlap.

Visual encounters with owls are relatively rare, because they spend most of the day perched high in trees, inside tree cavities, or in nest boxes. You are more likely to hear an owl than to see it. If you remain quiet, you can sometimes spot a calling owl with your flashlight. Make every effort not to disturb an owl during its late winter to spring nesting season, a critical time in its yearly cycle. Owls can also be viewed when crows, jays, magpies, or other birds discover them in their territory. The birds will defend their domain by diving and calling repeatedly at the perched or flying owl, an activity called “mobbing.” Look and listen for this behavior and see if you can locate the “invader.”

A good way to learn more about owls that live around you is to go on an owl walk with members of your local Audubon Society. Field trips, sharing ideas and sightings with others, and having access to local bird experts are some excellent ways to gain more knowledge.

What’s in an owl pellet? 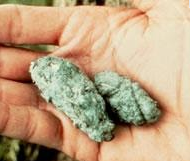 An owl pellet is a clod of fur or feathers and bone—the indigestible remains of the animals an owl has eaten. Because it swallows small prey whole and is able to digest only the fleshy parts, the owl regurgitates the remaining solid material as a compact pellet or casting. Where owls feed on insects, each regurgitated pellet contains the indigestible parts of the exoskeletons of numerous individual insects.

Although birds of many species regurgitate pellets, pellets from large owl species are especially suited for study because they are big enough to be examined without a microscope, and they contain the entire skeletons of small animals the owl has eaten. (Pellets of other raptors, such as eagles and hawks, are less useful since these birds tear much of the flesh from their victims, and do not swallow bones.) Because owl pellets accumulate in predictable locations, they are readily available for collection and examination.

Pellets last a long time in dry climates and in the protection of barns or other buildings. If they are soaked in warm water, carefully dissected, and examined under magnification, the identity of prey they contain can often be determined from the bones, teeth, and other remains.

The remains hidden inside a pellet usually represent the entire skeleton of every animal the owl has eaten during a night of foraging. There are almost always remains of two or more animals in each pellet.

Enjoy, and remember to wash your hands when done.