Mention the word “cedar” and many of us in the Pacific Northwest will picture a giant Western Red Cedar. However, a Western Red Cedar is not a true cedar. The true cedars are native to the mountains of the western Himalayas and the Mediterranean region. There is some debate on the number of different species of cedar but generally you will find four different species: Atlas cedar, Cyprus cedar, Deodar cedar and the Lebanon cedar.  The Lake Wilderness Arboretum has all four species of cedars in or near the Perennial Garden. 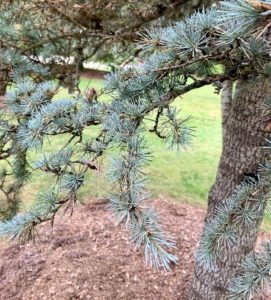 An Atlas Cedar in the arboretum

The Atlas cedar (Cedrus atlantica), which is located in the meadow just to the west of the entrance road to the nursery, is native to the Atlas Mountains in Algeria and Morocco. The slow to medium grower features short blue-green needles. 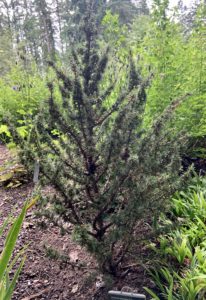 A Cyprus Cedar cultivar found in the Perennial Garden

The Cyprus Cedar (Cedrus brevifolia) is native to the mountainous areas of Cyprus. A commonly seen synonym is Cedrus libani var. brevifolia. The crowns on older specimens are broad and umbrella-shaped with short, horizontally-spreading branches. With a desire to show all four species of cedars, but having limited space, the Cyprus Cedar is represented by a miniature cultivar, Cedrus brevifolia ‘Kenwith’. With an annual growth rate of 1-3”, as opposed to 6-12” per year, the miniature cultivar was much easier to fit into the Perennial Garden. 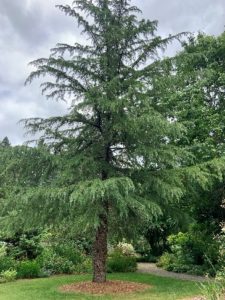 A Deodar Cedar in the arboretum

The large cedar located just to the east of the entrance road to the nursery is the Deodar Cedar, Cedrus deodara. This Himalayan native can be identified by its nodding tip, level branches and drooping branchlets.  Deodar Cedars are large trees that can reach 150’ tall with a trunk up to 10’ in diameter. 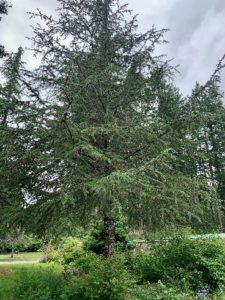 The Cedar of Lebanon near the flagstone patio

The cedar tree near the flagstone patio is the Lebanon Cedar or Cedar of Lebanon, Cedrus libani. This slow-growing tree develops a massive trunk, a flattened top and broad spreading horizontal branching. It is native to mountainous areas of Lebanon, Syria and Turkey.  It is the national emblem of Lebanon and appears in the center of their flag. It is widely used as an ornamental tree in parks and gardens.