Nothing flaunts old-fashioned charm like the immense flower heads of hydrangeas. These irresistible, unrivaled shrubs are native to southern and eastern Asia and the Americas. Most are shrubs (3’-9’ tall) while some are small trees and others climb up trees. They can be either deciduous or evergreen, though the most common species are deciduous. Flowers can be white, pink, red, purple or blue. The acidity level of the soil can affect the color. Leaves can be solid green or variegated with white or yellow. Flowers can be shaped like a big pom-pom (mophead), a flat, lacy top (lacecap) or a panicle. From mop tops to lace caps, dwarf to climbing, and variegated to oak-shaped leaves, there is a hydrangea for everyone.

The most widely grown type of hydrangea is the Bigleaf Hydrangea (Hydrangea macrophylla) with over 600 named cultivars. There are three categories of Bigleaf Hydrangea: Mophead, Lacecap and Mountain (H. ssp.serrata). The Mopheads feature large round flowerheads that resemble pom-poms or, as the name implies, the head of a mop. In contrast, lacecap flowers bear round, flat flowerheads with a center core of subdued, small flowers surrounded by outer rings of larger flowers. The Mountain Hydrangea (H. ssp. serrata) is similar to a lacecap except it is smaller, more compact with smaller flowers and leaves. The Woodland Garden has a variety of each type of bigleaf hydrangea, with flowers in pink, blue, purple, white, and pink and white. Some of the hydrangeas even have variegated leaves.

Smooth hydrangeas (H. arborescens) are known for their large creamy white flowers. When the shrub first blooms, it is a light green color and as it matures it turns to a creamy white. You cannon change the color of these flowers, like you can with mopheads. The leaves are typically heart-shaped and darker green than other hydrangeas. The species name “arborescens” comes from “arbor” meaning tree in reference to the similarity of this shrub to a small tree.  One of the most popular cultivars of the smooth hydrangea is ‘Annabelle’ which is planted near the gazebo. 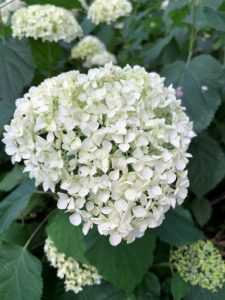 Oakleaf hydrangeas (H. quercifolia), with their lobed, oak-like, dark green leaves are native to woodlands of the Southeastern United States. Their pyramidal panicles of white flowers, that can be up to 12” tall, age in color from creamy white to pink and by fall are a dry, papery rusty-brown. Oakleaf hydrangea leaves turn rich shades of red, bronze and purple in the fall. Oakleaf hydrangea and Panicle hydrangeas are the only hydrangeas with cone-shaped flower clusters; all the others have their flowers in ball-shaped or flat-topped clusters. The Woodland Garden has two oakleaf hydrangeas, one standard and one cultivar, Hydrangea quercifolia ‘Snowflake’, which has intricate blossoms that resemble magnified snowflakes. 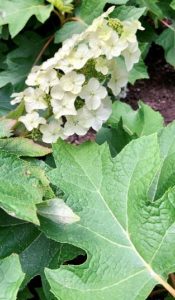 Climbing hydrangea (H. anomala var. petiolaris) does exactly as its name suggests, it climbs. This sprawling, deciduous, woody vine clings and climbs by twining and small aerial roots along the stems, maturing to 60’ long. It grows up trees and rock faces in its native Asian habitats. It can be slow growing and shrubby until established and then becomes vigorous. The lush green foliage is blanketed with white lacecap blooms in summer.  Growing near the climbing hydrangea in the Woodland Garden is another climbing plant commonly called the Japanese hydrangea vine (Schizophragma hydrageoides ‘Roseum’) because it has flat-topped, lace cap hydrangea-like flower clusters. You’ll notice the species name “hydrageoides” which means like the genus Hydrangea because of its resemblance. 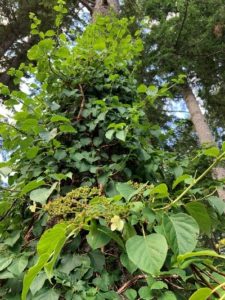 One hydrangea that seems to stand out on its own is the Rough-leaved Hydrangea (H. aspera) with its broadly oval leaves that impart a velvet-soft tropical aspect which is reflected in its name; in Latin, “aspera” means “rough-textured” and refers to the downy lower surface of the leaves. This This large (10’ tall and wide) shrub headlines good-sized bluish-purple lace cap flowers in the summer. 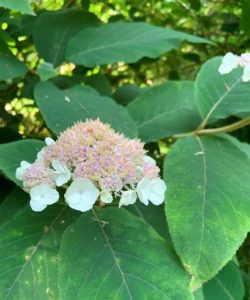 The Color of Hydrangeas

Can you change the color of hydrangeas? There is a lot of information available about this topic but the easy answer is “it depends.” Not every hydrangea changes color, some bigleaf hydrangeas (H. macrophylla) – especially mophead and lacecap types – and H. serrata cultivars change color based on the pH of your soil. Blues are best grown in acidic soil (pH of less than 5.5); pinks and reds do best in alkaline (pH greater than 5.5) or neutral soil. But the relationship between color and pH is more complex than just numbers on a scale. It is the availability of aluminum ions – and the degree to which a particular cultivar can absorb them – that influences color. And color change is not instantaneously but can take weeks or months for the desired change. It is easier to change blue flowers to pink than to change pink flowers to blue, and some cultivars are more prone to color variability than others.

If you want to change your white hydrangea, you are out of luck. White hydrangea color is not affected by the soil pH and will stay white. They do usually prefer the same conditions as the pinks and reds but will be happy staying white and can never be changed.

There is also a misunderstanding about pruning and deadheading.  Many hydrangeas can live long, floriferous lives without being pruned. But sometimes you might want or need to cut them back a bit because they are getting too leggy, too tall or too sprawled out. Pruning would be cutting whole branches out of the shrub. Cutting off the spent flowers is called deadheading and all types of hydrangeas can handle deadheading. For some, like the big Mopheads, it’s best not to deadhead until the early spring cutting back to the first healthy pair of buds. It’s fine to deadhead the Lacecaps; cut down to the second pair of leaves below the flower head.

Bigleaf (H. macrophylla), as well as Oakleaf (H. quercifolia), are pruned AFTER the flowers fade in the summer. These varieties bloom on old wood.